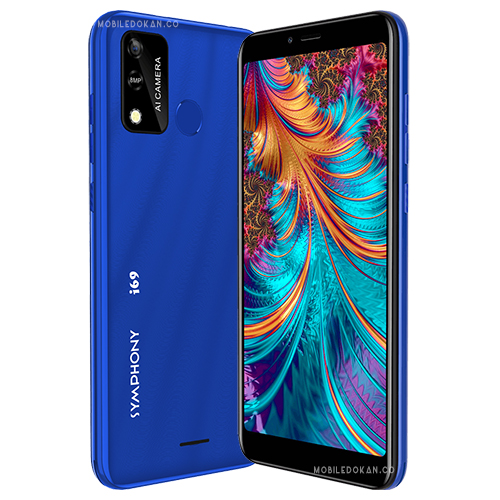 Symphony i69 Full Specifications and Price in Bangladesh

Symphony i69 Price in Bangladesh July 2022

The Symphony i69 is now available in one variant (32GB/2GB RAM). Now, Symphony i69’s Price is 6990 Taka in Bangladesh. i69 has a 3000mAh battery with no fast charging. This device is running with Android 11 and is powered by an unknown chipset.

Symphony i69 will be launched in October 2021. The i69 launched with model number unknown. Firstly, Its dimensional measure is 153 x 74.2 x 9.7 mm and the weight is 152 grams. Secondly, the display of the i69 is a 5.7-inch IPS LCD panel with 720 x 1440 pixels resolution. The display is protecting with Corning Gorilla Glass. Thirdly and most importantly, It is powered by the unknown and running with Android 11. Moreover, it has up to a 1.6GHz Octacore CPU.

Symphony i69 phone has a one-camera setup on the back. This formation consists of an 8MP wide camera. It has a 5MP selfie camera inside the notch of the display. The video recording capability is 1080p@30fps. According to its RAM and ROM, It has two (2GB/32GB) variants. On the other hand, it can support up to microSDXC on uses a dedicated slot. Certainly, i69 has a 3000mAh battery with fast charging. It has a dual nano-SIM card slot. That is to say, Symphony i69 is 2G/3G/4G supportable. The fingerprint sensor is rear-mounted.

Your question and our opinion about Symphony i69

What is the price of Symphony i69?

It contains an unknown chipset and Android 11. It has up to a 1.6GHz Octacore CPU.

The battery capacity is a 3000mAh Li-Polymer battery with no fast charging.

In this paragraph, we are going to describe the important major to buy this. Why a person may buy this smartphone? Firstly, when anyone wants to buy a device they find out the premium things on the device according to their price. So, let us find out some eligible things which are in Symphony i69.

In conclusion, we are giving our verdict on this device. If you want to buy the best 4G smartphone under 7K Taka. Then Symphony i69 will be in the first row among the best smartphones. Dear friends if you have an attraction to online games like Free Fire and so on then you can buy them. Because it has RAM and a well Processor using the unknown chipset. If you want a big backup on charge then you can buy this. Because it has a huge 3000mAh battery. In addition, it’s a 4G supportable smartphone. So, you can get good network facilities on it. However, it has a single-cam setup with an 8MP primary camera. So, it’s the image and video capability may be well. Therefore, to judge all of these reasons you can buy this.